Home › Blog › How Dangerous Are The Cicada Killers In New Jersey?

How Dangerous Are The Cicada Killers In New Jersey?

And you thought regular wasps were bad. Take one look at a cicada killer and you’ll probably feel your bones quiver at the sight of these massive, scary bugs. These pests have been described as yellowjackets on steroids, and it’s plain to see why. But just how dangerous are the cicada killers in New Jersey? 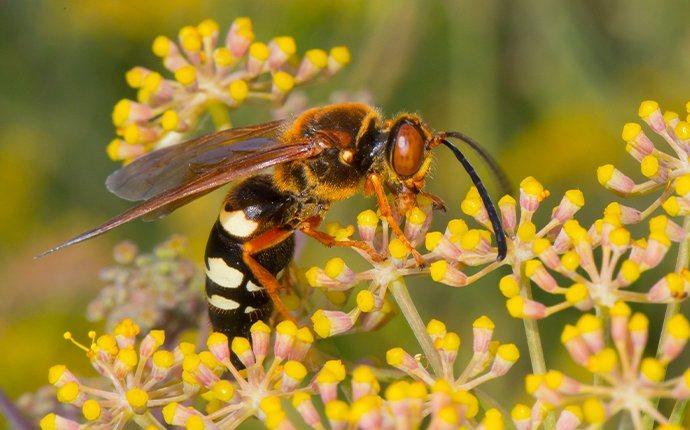 What Are Cicada Killers?

Cicada killers, aka cicada hawks, are an especially large species of digger wasp found primarily in the eastern United States. These wasps are all about size, measuring up to a whopping three inches in length. They typically have a reddish-brown color with yellow patterning. Their massive size allows them to wrangle (you guessed it) cicadas, which they use to feed their larvae. When spotted in the wild, many cicada killers are seen carrying cicadas.

Despite their freakishly large bodies, cicada killers aren’t especially dangerous to humans. Compared to other stinging insects, cicada killers are actually some of the least hazardous stinging pests. While males of the species may aggressively defend their territory, they lack a stinger to actually inflict any harm. Only female cicada killers are equipped with stingers, which they only use if provoked or improperly handled.

Cicada killers are far more interested in hunting their quarry than attacking people, and they do play a role in controlling the population of annoying cicadas. The only danger that cicada hunters pose is potential damage to your lawn from digging their solitary nests.

How To Prevent Cicada Killers

Nobody wants a bunch of three-inch wasps flying around their property like miniature fighter jets. While they might not be as bad as other stinging insects, it’s best to try and keep cicada killers from infesting your property. Luckily, there are few things you can do to prevent cicada killers on your New Jersey property:

Cicada killers are relatively harmless pests, but they can cause serious scares for those with flying insect phobias. So, if you’ve got a cicada killer problem on your New Jersey property, call the pros at Amco Pest Solutions. We can provide you with the advice or assistance you need to get rid of these big bad wasps once and for all. For cicada killers and your stinging insect control needs in New Jersey, get in touch with us today.