Home › Blog › Which Bees Sting And Which Ones Don’t? Identifying Stinging Insects

Which Bees Sting And Which Ones Don’t? Identifying Stinging Insects

Are you trying to enjoy the outdoors but keep worrying about stinging insects buzzing around? When you have a bee infestation on your property, it can feel like you are held captive indoors. While you should always have pest control services remove a bee infestation, not all infestations are alike. By identifying which bees sting aggressively and which bees are more passive, you can learn how bad your situation really is. 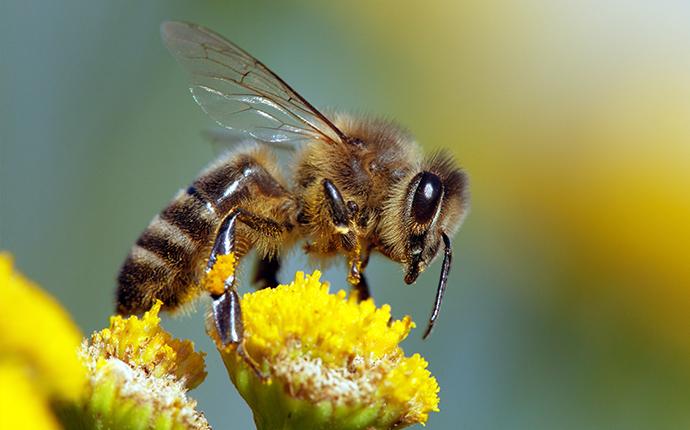 When most of us hear the word “Bees” we picture bumblebees. They are easily recognizable, with bands of yellow coloring across their black body. Ironically, the bee we all picture stinging us is one of the least likely to do so. Bumblebees typically only sting to protect their nest or if they were harmed. They are not aggressive and are mainly concerned with pollinating flowers. Contrary to popular belief, bumblebees do not die after stinging someone. If you have a bumblebee infestation, it’s best to call pest control services and have it taken care of.

The honey bee is smaller than the bumblebee and, rather than black and yellow, they have tan stripes over their black bodies. Like the bumblebee, honey bees are generally not aggressive unless they are threatened or their hive is in danger. When honey bees sting someone, they lose their stinger which removes the abdomen – so they have very little to gain by doing so. When you see a swarm of honey bees, it can be very intimidating. However, swarming bees have usually eaten recently, which makes them more docile and less likely to sting. If you stay away from the area, you shouldn’t have any issues.

When answering the question “Which bees sting?” The answer often isn’t a type of bee, but wasps. Wasps, in general, are more aggressive than bees but the paper wasp is on the less aggressive side of the spectrum. Paper wasps can be identified by their orange, red, and burgundy bodies with black and yellow stripes. They usually only sting when they are threatened, however, they have small nests that can be quickly built in places where people inhabit like on porches or even in the house. Fortunately, they only use their nests once and the entire colony dies during the wintertime. If you notice a paper wasp nest that is not in an area where people frequent, you can probably leave it alone. If the nest is close enough to cause issues, call pest control immediately.

Although they are called hornets, these are actually wasps. They have large nests that usually reside up in tall trees. Bald-faced hornets are territorial, meaning if their nest is too close to your home or business, you may be at risk. If you notice a wasp with black bodies and white markings around a large nest, make sure the nest is professionally removed.

“Which bees sting?” – Yellow Jackets is always a safe answer. Yellow Jackets pose a pretty serious threat for several reasons. The first is that they have similar colors to bumblebees and honey bees. This may lead someone to ignore them and not call an exterminator. You can identify yellow jackets by their smooth exterior and thinner body compared to the ‘fuzzy’ honey bees and bumblebees. They are also problematic because they usually live in the ground which makes it easy to disturb them. Yellow Jackets can swarm in numbers up to the thousands while attacking. When you find yellow jackets on your property, remedy the issue quickly and professionally.

Despite the name, European hornets can be found in many places across the United States. They have smooth, yellow, and black bodies and are easily mistaken for yellow jackets. The main difference is they never live in the ground and make their nests in places like tree hollows. They are not as aggressive as yellow jackets and can be left alone if they aren’t too close to areas where people frequent.

Learn More About Which Bees Sting And How To Remove Them

If you’re unsure whether or not you have a dangerous bee or wasp infestation or the problem is beyond your control, you can always count on AMCO Pest Solutions. AMCO has been coming up against problematic critters for a long time. In fact, we got our start as termite control consultants nearly a century ago. So if you want an affordable and definitive solution to your pest problem, give us a buzz!

Amco has been a great company for me and my family. They provide us a great service every time we have a need. The knowledge they have as well as the teaching they provide is priceless. Thank you George.